A Journey Into the Light of Political Awareness
You are here: Home / Political Commentary / Move Your Money!

The Entitled Ones are always saying: “Let the market decide.”

46.2 million Americans – that’s 15.1 percent of us – now live in abject poverty. We rescued the Too-Bigs, now they are tossing families into the streets and demolishing their foreclosed homes. People are struggling to survive in tent cities right here in the United States of America. World-class tax dodgers are downsizing and outsourcing us, quite literally, to death.  We are considered no more than collateral damage, mere sacrifices upon the Altar of the Almighty Buck.

Millions jobless… homeless… sick… shivering… hungry…. and the sociopaths running this star-spangled neocon/neolib asylum DO. NOT. CARE. In fact, they think it’s FUNNY.

It is impossible to do the ‘bootstraps’ thing when someone keeps stealing your boots!

In most, if not all locations, you no longer need to be employed by a certain business or within a particular industry in order to join a credit union. (For example, the one nearest me only requires that members live, work, study or worship within this county.)

You can find the credit unions closest to you here. Changing bank accounts is always a hassle, but many credit unions offer online switch kits that make it easier. Here’s an example.

Kristen Christian told us why she created “Bank Transfer Day.” Our corporate overlords – including the pointy-headed, modern-day Medici wannabes – brought it on themselves.

Anne Stuhldreher: “This is the biggest grass-roots reaction that we’ve seen from the financial crisis yet.”

Brett Martinez: “Unlike banks, which try to make as much money as possible from their customers and give it back to their shareholders, credit unions are nonprofit organizations that return profits to their members in the form of better rates on loans and deposits.”

Alli Panelas: “I’d rather invest my time, energy and money in a community institution rather than a large bank.”

We’re with you, Alli!

You can do a search for your nearest credit union right here.

Can you hear us NOW?

Paul Grignon‘s “Money As Debt” videos do a great job of explaining how we reached this point, illustrating just how large a sinkhole-ridden Ponzi scheme the entire global economy has become, and why moving our money into locally-controlled, non-profit credit unions or small, community banks is a critical step toward ensuring our own survival.

37 banks have now been consolidated into four – only 4! – insatiable fiscal behemoths: 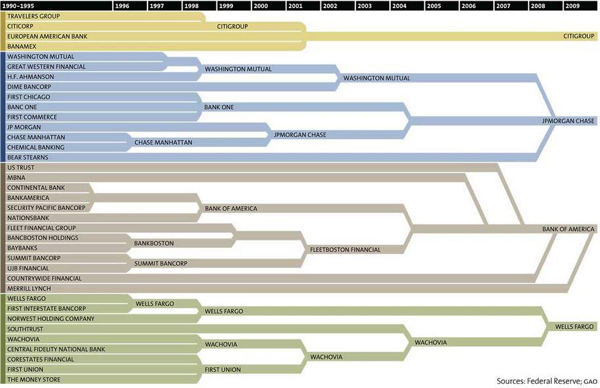 Move your money. Move it now.
Stop feeding the beasts!