A Journey Into the Light of Political Awareness
You are here: Home / Nooz Not Seen on TeeVee / Take A Stand: The Rule of Law 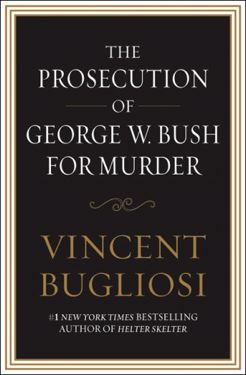 SEATTLE, WA. Feb. 17, 2009 – A 57-year old Seattle coffee bean entrepreneur hopes he just brewed a pot of trouble for former president Bush and others in his administration.

On February 7th Bob Alexander his wife, Arminda and local volunteers, mailed a copy of legendary prosecutor, Vincent Bugliosi’s book, The Prosecution of George W. Bush for Murder, to 2,200 local district attorneys across the US.  Each of these prosecutors has had at least one soldier from their district killed in Iraq.

Bugliosi is best known for his prosecution and conviction of Charles Mason. As a Los Angeles County Assistant District Attorney, he successfully prosecuted Charles Manson and several other members of his “family” for the 1969 murders of Sharon Tate and six others. He lost only one of the 106 felony cases he tried as a prosecutor, which included winning 21 out of 21 murder cases

While Bugliosi’s name may be familiar to some, Bob Alexander’s is known only to customers who purchase premium coffee from his SuperBeans.com Web site. Bob and his wife were motivated to take personal action after reading Bugliosi’s book.

“Last Summer, I read Vince’s book,” Alexander said. “After years of thinking that Bush, Cheney, Rumsfeld and Rice would walk away from their crimes, here at last was hope that something could be done to help put right their horrible wrongs. In his book Bugliosi clearly lays out how any district attorney can indict and prosecute Bush, and other administration figures, for murder. All any DA needs to prove they have jurisdiction is to show that a soldier from his or her county had been killed in the War in Iraq.”

Taken by the simplicity and clarity of Bugliosi’s legal argument, Alexander initially used his web-based business to promote both the book and it’s central premise. Customers who logged on to purchase another pound or two of Kona coffee beans, were instead met with the message:

“In lieu of buying coffee this month … please consider picking up a copy of Vincent Bugliosi’s book instead. When you’re finished reading the book … send your copy to your State Attorney, or your county District Attorney. Or better yet … deliver it in person.”

The next day, Jude Morford, founder of “woman standing,” called and told Alexander that she was taking him up on his challenge and planned to hand-deliver her copy of Bugliosi’s book directly to her local district attorney, and wanted Bob to accompany her.

“That’s when it struck me.” Alexander said. “Although I wanted as many Americans as possible to read this book, district attorneys should be at the top of the list. So I suggested, let’s mail this book, written by one of America’s preeminent prosecuting attorneys, to every DA in the country since it sets forth such a prime facia argument for prosecution.”

Alexander set up a new Web site, http://www.prosecutegeorgebush.com, asking for donations and volunteers. The goal was to raise enough money to buy 2200 books and to mail one to every district attorney in America.

“The site went ‘live’ Wednesday night, September 17, 2008,” Alexander said. “The only media promotion we received was from radio talk show host, Mike Malloy. His audience alone donated more than 95% of the money we needed. By January his listeners had sent in enough $3 to $15 donations to put us over the finish line.”

After negotiating an “at cost” deal from the publisher, Alexander was able to cover the $17,000 for the books and postage. By February 7 all 2,200 books in the mail making to district attorneys from New York to Hawaii. In all it came to 5 pallet loads of Bugliosi’s book, weighing in at two tons.

Reached for comment, the author, Vincent Bugliosi, voiced hope that Alexander’s efforts will finally prod at least someone with criminal legal authority to act.

“I hope that this increases the possibility that a courageous prosecutor, committed to the rule of law, will hear the cries for justice from the graves of the thousands who had their lives violently cut short and take the ample case I have laid out in this book before an American jury to let them decide whether George W Bush and others from his administration are guilty or not guilty, and if guilty and, if found guilty, what the punishment should be,” Bugliosi said.

When asked what he thought about the prospects of his efforts sparking a Federal, state or local investigation and prosecution Alexander said he had little faith that either federal or state systems of justice will rise to the occasion, which is why he mailed Bugliosi’s book only to local prosecutors.

“I don’t believe we should wait to see what the feds or states will or won’t do,” Alexander said. “Or to paraphrase a popular bumper sticker … ‘Think Globally – Prosecute Locally.'”

A message from Former U.S. Attorney General Ramsey Clark: ‘Why indictment is a must.’

I am writing to you as a long-time supporter of the ImpeachBush movement. More than a million people came forward to demand the impeachment of Bush and other high-ranking officials in the Bush administration.

I am appealing to you to make a donation to a growing new movement for the indictment and prosecution of George W. Bush, Dick Cheney, Karl Rove, Donald Rumsfeld, Alberto Gonzales and other high officials of the Bush administration who engaged in criminal wrongdoing.

The greatest danger arising from impunity for President Bush and his cohorts would be that all subsequent officials will feel secure in committing the same crimes and the people, having failed to compel impeachment for such open, notorious and egregious crimes, will feel even more helpless to prevent them. Ultimately the power and the responsibility to prevent criminal acts by government is with the people.

Now is the time for massive outreach and publicity. This requires organizing national call-in days to pressure Congressional representatives, intensive media work, and providing literature for people of conscience to distribute in cities and towns across the country.

There is no time to spare. The time to act is now and we will.

The crimes of the Bush administration must be proclaimed, acknowledged and remembered because their disastrous human consequences, dictatorial tendencies, subversion of Constitutional government and violation of the rights and dignity of humanity. They include wars of aggression, the crime against peace and the “Supreme International Crime,” war crimes, and crimes against humanity, genocide by military violence “with intent to destroy in whole, or in part, a national… or religious group,” authorizing and condoning massive violations of the Constitution of the United States, its Bill of Rights and other Amendments, international treaties including the U.N. Charter, Treaty on Non-Proliferation of Nuclear Weapons, Convention Against Torture, International Covenant on Civil and Political Rights, and the Geneva Conventions.

The clear duty of the American people and their elected representatives — on which the changes in U.S. government policies essential to achieve a peaceful, decent and humane future depend — is the vigorous pursuit of the indictment of former President Bush, Vice President Cheney, and other high officials who have participated in their crimes, followed by rigorous criminal prosecution wherever the evidence, having been fully and fairly presented to a federal grand jury, results in their indictment.

The indictment of George W. Bush and other high officials is the challenge facing ‘We, the People.’ Will we rise to meet it? This is not a matter of politics or partisanship. It is the defense of the basic tenets of the Constitution.

Please consider making a donation so we can get this movement off the ground and into the streets.

From: The Rest of Us

I heard your speech the other day, you know, the one in which you accused Americans of being “cowards when it comes to discussing race.”

Here’s what I have to say about that:

Shut up the “f” up and start prosecuting…

Please ask organizations you are in touch with to join the long list of groups signed on below to the following statement.

They can sign on at http://prosecutebushcheney.org
or by emailing david@davidswanson.org

We urge Attorney General Eric Holder to appoint a non-partisan independent Special Counsel to immediately commence a prosecutorial investigation into the most serious alleged crimes of former President George W. Bush, former Vice President Richard B. Cheney, the attorneys formerly employed by the Department of Justice whose memos sought to justify torture, and other former top officials of the Bush Administration.

Our laws, and treaties that under Article VI of our Constitution are the supreme law of the land, require the prosecution of crimes that strong evidence suggests these individuals have committed. Both the former president and the former vice president have confessed to authorizing a torture procedure that is illegal under our law and treaty obligations. The former president has confessed to violating the Foreign Intelligence Surveillance Act.

We see no need for these prosecutions to be extraordinarily lengthy or costly, and no need to wait for the recommendations of a panel or “truth” commission when substantial evidence of the crimes is already in the public domain. We believe the most effective investigation can be conducted by a prosecutor, and we believe such an investigation should begin immediately.

Grandmothers Against the War
http://www.grandmothersforpeace.org/gatw

Iraq Veterans Against the War
http://ivaw.org

United for Peace and Justice
http://www.unitedforpeace.org