A Journey Into the Light of Political Awareness
You are here: Home / Abuse of Power / Supporting Our Troops?!

Here’s how much respect the powers-that-be truly have for our rights and constitutional protections – even for those who have served and sacrificed the most to protect and defend those very rights! – once they’re back here in the Land of the Fried and Home of the Bruised: 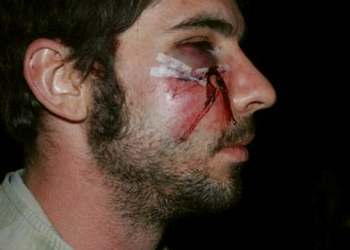 This poor soul is former Army Sergeant Nick Morgan after his face was crushed by the hoof of a police horse on the night of the last 2008 presidential debate.

Iraq Veterans Against the War had one mission: to ensure that the issues most important to veterans would be included in the debate. They had received no response from Bob Scheiffer regarding their request to be allowed in, so led a few hundred peaceful protestors to Hofstra University’s main gate at 7 p.m.

When a few of the vets attempted to enter, this was the immediate response by those who have sworn to protect and serve [the oilygarchy]: 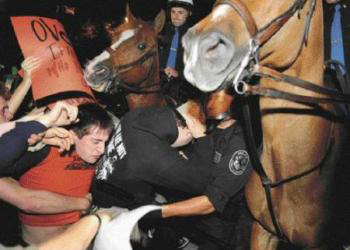 Democracy NOW! has video and an Amy Goodman interview.

Cheekbone broken in three places and surgery to keep his eye from sinking into his sinuses. OUCH!

How ironic is it that the only violence happening in the streets during these peaceful protests is being committed by the POLICE?!